Skip to content
Who gets 3D and 4D ultrasound scans? 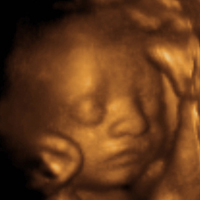 Since they aren’t part of the standard prenatal tests, these scans are optional. Doctors usually perform 3D ultrasounds on women who request them.

There are several advantages associated with 3D and 4D ultrasound scans. For the parent they are able to see their baby’s face and other features before she is born. This helps in bonding. For doctors, 3D and 4D scans can help identify abnormalities such as cleft lip and be able to report and prepare for corrections to be made after the baby is born. Such abnormalities aren’t easily identifiable through 2D scans.

Like 2D, 3D and 4D ultrasound scans are believed to be safe. In addition, the images rendered by these two scans can help doctors identify any abnormalities which they can explain to the would be parents after scans are complete.

The main concerns about ultrasound safety surrounds companies that offer the service without qualified personnel. Authorities in ultrasound like the American Congress of Obstetricians and Gynecologists pose that too much exposure to ultrasound might have harmful effects on the unborn baby. The same position is held by the American Institute of Ultrasound in Medicine especially if the scan is performed in facilities without qualified sonographers.

Before taking an ultrasound scan, it’s advisable to consult your doctor.

How is 3D 4D ultrasound Houston area is performed

The sonographer will ask you to lie down on your back. A gel will be applied on your belly. The gel helps to transfer the sound waves from the womb to the probe. A probe is then placed and moved along your belly to produce an image on screen.

After the ultrasound scan is complete, the doctor may provide pictures or a DVD movie depending on your agreement. You’ll also receive a report regarding the state of your pregnancy.

It’s worth noting that 3D and 4D ultrasound scans aren’t typically used used for medical diagnosis but meant to allow you to see her before she’s born.

About the Author: Ashley Walker

Jessica Robinson
19:14 07 Jan 17
I called last minute to try and see if I could get a gender reveal appointment. I was offered the last appointment of the very same day I called. The atmosphere was amazing and the owner was beyond amazing and sweet. I loved everything about the experience. I will definitely be going back for a 3D ultrasound and will be recommending this place to all of my friends!!!

Lindsey Quintero
22:57 25 Jan 17
She made us feel so comfortable and we had such a great experience! I would definitely recommend!

Samanda Partida
18:41 08 Sep 16
I love sneak a peek imagining great prices and the ultrasound tech is so nice she takes her time to make sure you are happy with your pictures she gives you enough time to enjoy the 3D ultrasound and the gender checks I would recommend all my pregnant friends to her I loved it here btw she got me some awesome 3D pictures of my baby

Mischelle Walls
23:27 07 Sep 16
Very nice lady, my daughter has been here and now my daughter-in-law.

Amber Anderson
02:25 01 Dec 16
Best experience ever, recommending to everyone I know!

Leeann Long
22:22 04 Feb 20
The DVD needs music. The black and white shots were not easy to see and there is no indication of what those shots are of. There is some lag time where the video is just blank, up to what seems like a full minute. For 100$ I feel like it should have had those things. I had a 3d ultrasound done 12 years (!) ago that had music and the tech typed in things like Hi Grandma, or This is my foot, etc. This had none of those bells and whistles. HOWEVER, the shots we got of our babes' face were very good and I was so pleased to see her so clearly. I give 4 stars for that and the fact that the lady that owns this place and performs the scan is very personable and I think that is where she gets good ratings from.

Ash Esquivel
20:44 04 Dec 19
I went there today to find out the gender of my baby after reading the reviews... Ashley is such a kindhearted sweet lady you can tell she really loves her job and really cares about people. She makes you feel so comfortable and at home!!! The images she got of my son were beautiful considering im only 19 weeks they came out so good!! Id definitely recommend her to anyone looking for a 3d ultrasound thats not too pricey!!

Meagan Hernandez
19:48 12 May 19
Best service I have received and will continue to come back. This is the second pregnancy I have used her with and she always has the best customer service. This last appointment was the THIRD reschedule because baby was hiding on the first 2 and she allowed me to come back additional times with no charge until we saw the baby pop up. Super friendly and makes all the appointments a positive experience whether I am alone or the hubby tags along. My first time going through her was after trying to call the other 3D place in town for a simple heartbeat check while I was waiting on my paperwork to be processed to a new OB and they would not allow me to make an appointment without the doctor signing off on it. Which was impossible until all the transfer paperwork went through and unnecessary as it was just for pictures and not a diagnostic scan. She does not require this and was able to give me peace of mind until the transfer had been completed. I have used her with a twin pregnancy and a singleton with stunning results each time. Well worth the money and nothing can compare to the reassurance of making sure your little one(s) are doing great and moving around. Cannot recommend her highly enough, thank you for what you do!!!!!!

yasmeen reyes
17:07 27 Aug 19
Had a great experience with Ashley! My son was NOT cooperative at all and she gave me some tips and pointers to help me get a better round 2! She was great, even if our little butterball was being uncooperative. Would recommend her and come back again!

Kennyah P.
15:55 12 Oct 19
Ashely was AMAZING!!!! I know i have given her alot of trouble lol & every single time she has been the nicest and sweetest person ever answering all my questions & giving me advices. Totally recommend her. She’s absolutely THE BEST!!????
See All Reviews